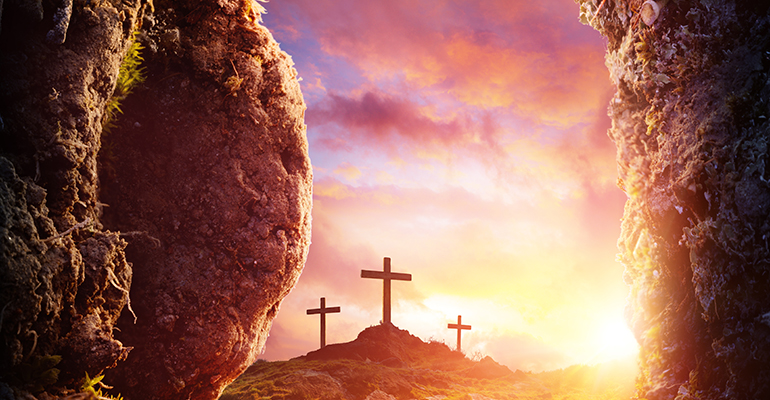 I.    Vs 1-3          Empty Tomb
Easter Sunday is the day in which we celebrate the resurrection of Jesus
Christ and thank him for making salvation available to the entire human
race. In our court system the goal is justice and the people require
evidence for justice to prevail. People also require evidence as it relates
to Jesus Christ being alive, because Christians say that he was crucified.
Our text provides four pieces of evidence to prove that Jesus is alive and
every day is Easter to a believer. Evidence number one is that Mary
Magdalene, Mary, and Salome entered an empty tomb. The body of Jesus was not there and the angels told them “why do you seek the living among the dead”. We have found the Rosetta Stone, Lascaux Cave, Venus De Milo, and the Dead Sea Scrolls, but nobody has found the body of Jesus Christ. The reason nobody has been able to produce his dead body is, because he is alive. All of the gospels declare that the tomb was empty and Jesus is alive (Matthew 28, Mark 16, John 20). *Point: If Jesus is not alive, then show me the body. Show me the body and I will stop going to church, preaching his word, praising his name, and giving to the Kingdom. Because I Corinthians 15:17 says “And if Christ be not raised, your faith is vain, you are yet in your
sins.” You can’t show me his body, but I can show you an empty tomb.


II.    Vs. 4-8       His Word
The second piece of evidence is the Word of God, because the text says that
they remembered his word. Jesus told them that he was going to be delivered to sinful men, crucified, and rise the third day. He told them these facts while he was alive and before the events took place. Now it’s the third day and they are searching an empty tomb. We have a record of his word and it’s called the scriptures (Bible). History has a record of every man that ever served as President of the United States and we accept the report that
George Washington was the first. So, God has a record and his report is more valuable than a dollar bill. The record is his word and his son who said “I am the resurrection and the life, he that believeth in me though he were dead, yet shall he live”. The Bible is much more than history, but it is his story. The word says that he died for our sins, was buried and rose for our justification. Christ is alive, because the Word says “that Christ died for
our sins according to the scriptures, and that he was buried, and that he
rose again the third day according to the scriptures.” I Corinthians 15:3-4


III.    Vs. 27-43          The Witnesses
It is much easier to convict a person of a crime when you have DNA and
reliable witnesses to verify the events related to the crime. The Lord has
provided us with DNA (his blood) and several people have testified that he
is alive in our text. The third piece of evidence is these eye witnesses to
the resurrection of Jesus Christ. So, let’s start with the women at the
tomb, Cleopas, the disciples, the marks on his body, and he ate with them.
Paul presents even more evidence in I Corinthians 15:5-7 and states that
some of the witnesses were still alive at the time of his writings. Christ
spoke to people and told them that he was alive. Witnesses are very
important in the court of law and the Lord has provided several witnesses to declare that he is alive. They saw him, talked to him, and even ate with
him, because he is alive. These witnesses saw him over a forty day time
period after the resurrection until he ascended to heaven. He is coming
again and I’m coming with him.


IV.    Vs. 44-49         Changed My Life
The final piece of evidence is that millions of lives have been changed,
because Christ is alive today. The text says that he suffered, and rose on
the third day, so that the gospel could be preached to all nations. I’m a
living witness that he is alive, because I’m not the same. He changed my
life and I’m a new creature in Christ Jesus. I will not give you a list of
the things I did before Christ, because the list is too long. I’m not
perfect, but I’m not the same either, because he lives. Because he lives, my
sins are forgiven, I have a home in heaven, and my life has purpose. So,
thank you Lord for all you have done for me. He is not just alive on Easter,
but he is alive every day.

Because He Lives
Bro. Mack

“Pursue peace with all people, and holiness, without which no one will see the Lord.” Hebrews 12:13